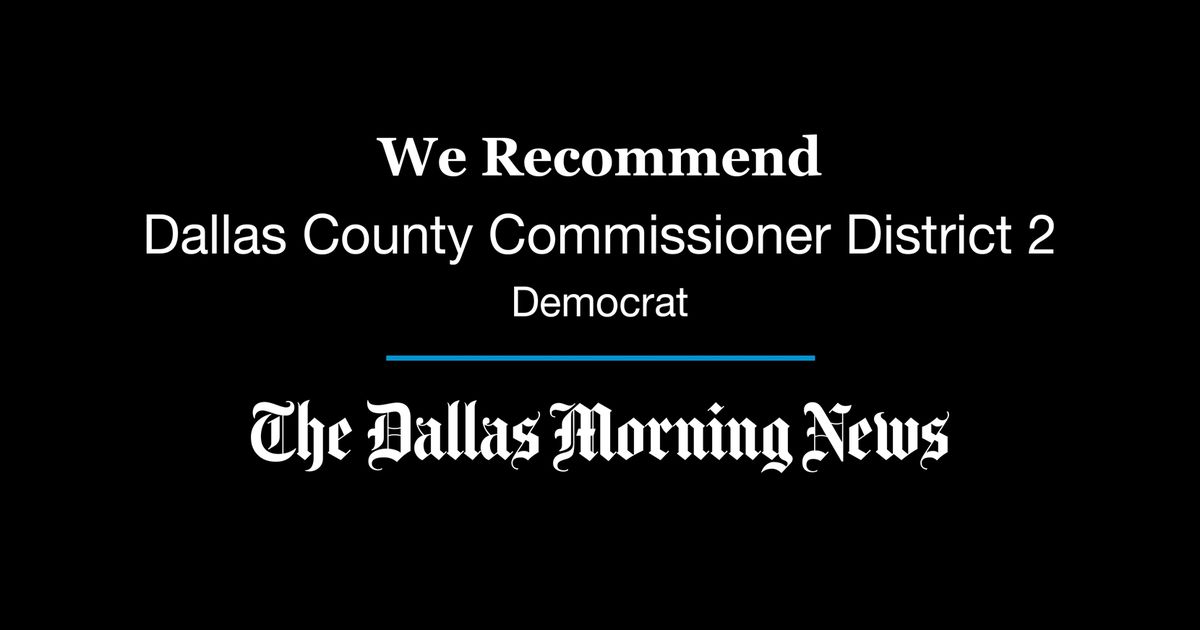 This editorial is on the Dallas Morning News editorial board’s list of recommendations for the 2022 primary. Find the full project here.

Dallas County redrew its commissioners’ court map last year, with District 2 stretching from Coppell to Richardson and dipping past the Park Cities and into Old East Dallas. The change appears to have broadened the field of Democrats vying to unseat Republican incumbent JJ ​​Koch in the fall. Of the four contenders, Andrew Sommerman and Philip Kingston are the most qualified, but our nod goes to Sommerman.

Sommerman, 61, is a civilian attorney and a resident of northwest Dallas. His legal work focuses on personal injury cases, but also extends to voting rights litigation. Earlier in his career, he served as deputy city manager for the small town of Pantego, near Arlington, and worked as a congressional investigator for the United States General Accounting Office.

Dallas County Judge Clay Jenkins asked Sommerman to represent him in a lawsuit against Koch over mask warrants. Koch sued last year after a confrontation at a public meeting in which the commissioner defied Jenkins’ orders by refusing to wear a mask. Jenkins then sued Governor Greg Abbott over his ban on mask mandates.

Sommerman told us he decided to run for Koch’s seat because he didn’t want political theater to drive public health policymaking. He supports ongoing efforts to make Dallas County less reliant on cash bail, an issue current commissioners agree on. Sommerman said criminal justice reforms in New Jersey show that releasing low-risk suspects on terms other than cash bail has led to a decrease in prison population without increasing crime.

By decreasing the number of inmates, the county jail can reduce its costs and staffing needs, Sommerman said.

Sommerman wants judges to have enough information to determine whether an accused poses a risk to community safety. He supports an overhaul of the courts’ software system and increasing the budget for the Sheriff’s Department to find and help defendants who don’t show up for their court dates, including people with mental illnesses.

Kingston, 49, a civilian attorney who lives in East Dallas, served on the Dallas City Council from 2013 to 2019. During that time, he built a record as a champion of progressive politics, helping kill plans to a toll road along the Trinity River and push for a citation and release program for low-level marijuana offenses, among other things.

Kingston said he was running to make county government bolder and to remove Koch from office. But his reputation as a combative policymaker is reminiscent of the theatrics that Democratic candidates say they are trying to replace.

40-year-old lawyer Michelle Ocker and 68-year-old businessman Tom Ervin are also in the running. Both are actively involved in Dallas-area Democratic campaigns and causes, and we hope they will remain involved in local politics. Ocker ran unsuccessfully for Carrollton City Council and Texas House District 115, and Ervin lost the 2020 Democratic primary for Texas House District 108.

In this crowded race, Sommerman’s experience and temperament make him the best choice for voters. The winner will face Koch in the November general election.