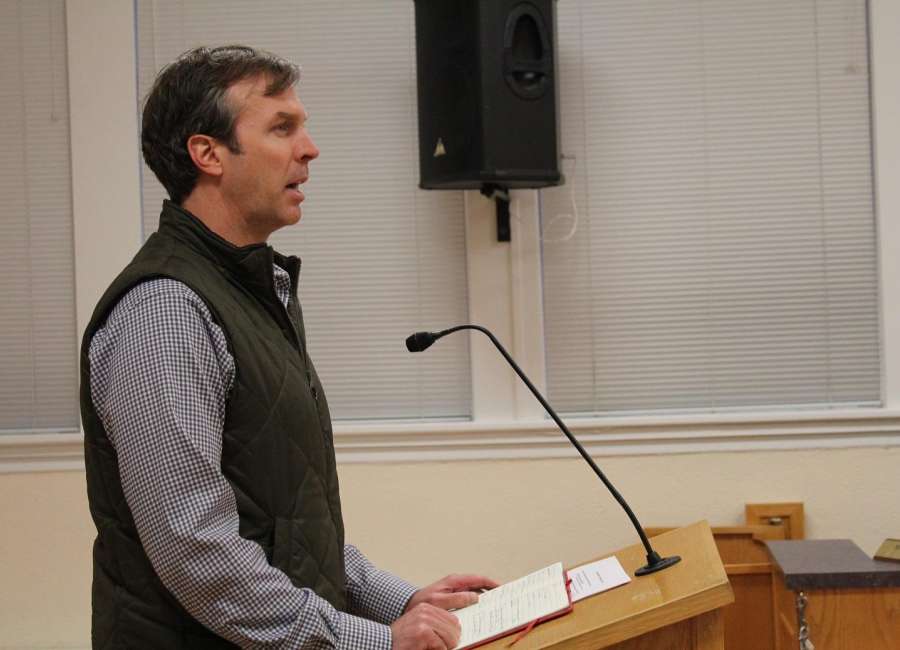 Tyler Jones presents details of a potential warehouse in Grantville to the city’s planning and zoning commission.

After a presentation from developers and feedback from residents, the City of Grantville Planning and Zoning Commission voted to recommend that City Council deny the rezoning of 101 Lowry Road from R-20 residential to light industrial.

A public hearing on the rezoning will take place at the February 28 meeting of the Grantville City Council.

The rezoning was requested by industrial developer Robinson Weeks, who wants to build a 1 million square foot warehouse on the site. The warehouse construction will also include a right turn lane from Highway 29 to access the site.

According to Tyler Jones, a representative developer of the project, the warehouse is a speculative project – it is designed for a variety of uses, but currently there is no company that will occupy the space.

John Walker, a traffic engineer for the project, said based on surveys the warehouse could expect 830 vehicles to enter the property and 830 to exit. 550 would be cars for employees and 280 would be trucks.

Jones said the buffer zone between the warehouse and neighboring homes would be “quite substantial” and the warehouse could not be seen from residences.

According to Jones, the city of Grantville should receive $1.9 million in tax revenue per year.

Robinson Weeks had previously requested a development agreement with the city to build a sewage treatment facility at the location of the warehouse. The developer would pay for the construction of the facility, which would then be turned over to the city for maintenance and operation.

Connecting the warehouse to the city’s sewer system would require extending the piping across the highway.

The board did not show enthusiasm for the deal during its December working session and has yet to make a decision on it.

City engineer Brennan Jones described the potential sewage treatment facility as “fairly passive” and said an operator would need to check the facility once or twice a week for a few hours.

“Whatever arrangement they reach with the city, they can have those costs covered in that arrangement,” he said.

“It’s a preliminary discussion,” Jones said of the development deal. “Nothing was agreed upon, but it was actually put forward as an alternative solution for the city to address any type of capacity issue.”

Grantville residents who attended the meeting did not express support for the development. Many said they favored the city’s growth, but opposed the location of the warehouse. Other residents were concerned about the warehouse’s impact on traffic near the freeway exit.

Grantville resident Josh Faircloth said nearby roads are already having problems and he doesn’t think they can handle new traffic.

“This road here is going to be difficult to manage,” he said. “I know when they have an accident, we can’t even get out of the subdivision.”

Grantville resident Andrew Williams echoed similar sentiments. He said he thought the warehouse would be a stress on the community.

“What if this place catches fire? Do you expect the two guys here to put it out? My brother is a firefighter. I don’t want him to die in a warehouse because they’re in understaffed,” he said. “We can’t manage that. I want growth. I’m a wood seller, it puts money in my pockets, but not like that. It’s too heavy to manage.”

“It’s like the NASCAR 500 as it is now,” he said. “You get transfer trucks and increased traffic; it’s a death trap.”

The Planning Commission unanimously voted its recommendation to council.

Commission member Danny Clay said he came to Grantville because of the slow pace of the city and wanted to preserve that.

“I would like him to remain silent,” he said. “I feel for those people out there on Lowry Road. I have a good friend that I grew up with through school who lives in Lowry in Meriwether County, and I know what an impact this will have on them too.”