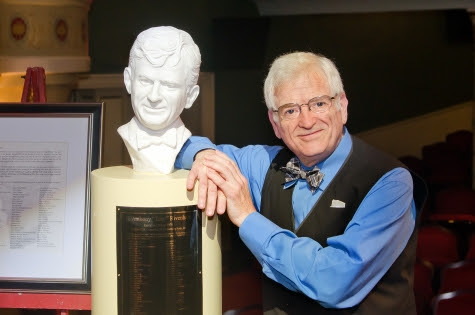 WILMINGTON — A Wilmington cultural icon, historic curator and revered actor who ran historic Thalian Hall for four decades has died. Tony Rivenbark was a champion and steward of Cape Fear’s arts community and in particular of its historic theatre, built in 1858. The 74-year-old was executive director of Thalian Hall for 42 years.

The theater – which also home to Wilmington city government operations – has become a beacon of art production and historic preservation under Rivenbark’s watchful eye. In 1983, the General Manager helped lay the groundwork and master plan for the Hall’s extensive renovations and expansions.

The first took place between 1988 and 1990 – a $5 million project that included expanded halls, the inclusion of what is known today as the Ruth and Bucky Stein Theatre, as well as improvements to the wings and a new north wing, among other amenities.

Twenty years later, in 2010, another $3.6 million renovation took place to reconfigure the main stage seats, a hydraulic orchestra pit and the introduction of “Alice”, the beloved chandelier in Victorian style suspended above the audience.

Over the past year, Thalian has undergone further improvements, including backstage upgrades and restorations to the main hall, as well as a new stage surface.

Rivenbark’s love for Thalian was also captured in written form in “Time, Talent and Tradition” published by the Cape Fear Museum in 1990. In 2015 he wrote “Images of America: Thalian Hall”, published by Arcadia Press . Recently, Rivenbark wrote an essay, “The Theater That Never Got Finished”, which will be published in the book “Theatre Architecture” by the Theater Library Association at Lincoln Center in New York.

Having served on the board of the League of Historic American Theaters, Rivenbark has lectured nationwide on Thalian and the importance of its continuation.

Not only was he the theater’s most beloved caretaker, but he also appeared on its stage for many years, first in 1966 as part of the musical “Good News.” A gifted actor who received many accolades throughout his life – including Wilmington’s Lifetime Achievement for the Arts in 2004 – Rivenbark has appeared in more than 200 productions, both local, regional and Off-Broadway (“Holy Ghosts with Beth Grant and “The Passionate Men” with Peter Bartlett).

Just in May, he received the Thomas and Elizabeth Wright Lifetime Achievement Award from the Historic Wilmington Foundation for his dedication to historic preservation in the Lower Cape Fear.

“Rivenbark exemplified the best attributes of a preservationist: stubborn persistence, an inexplicable ability to relate to a building, and a fundamental understanding that historic resources are preserved because of the stories they share,” noted the foundation. in a statement Tuesday.

According to Thalian Hall, all productions and events will go ahead as planned at the site, three of which will take place this weekend. New Hanover County Commissioner Rob Zapple — who sits on the board of Thalian Hall — will step in as interim director.

Zapple has directed Rivenbark over the years in numerous productions of “A Christmas Carol”. Rivenbark was known locally for playing Scrooge, a role he performed more than a dozen times.

Thalian will conduct a nationwide search for Rivenbark’s permanent replacement, according to a statement.

“We understand that finding the right candidate to succeed him will be a difficult undertaking,” said Terry Espy, Chairman of Thalian’s Board of Directors. “We are extremely grateful that a thorough audit of the organization was recently completed, which leaves us well prepared for the task.”

On Tuesday evening, Thalian, along with the CFCC’s Wilson Center, UNCW’s Kenan Auditorium and the City of Wilmington’s Meadowlark Lemon Bridge will pay tribute to Rivenbark by illuminating facades purple through Saturday.

The League of Historic American Theaters will share the remembrance with venues across the United States participating in the tribute.

Want to know more about PCD? Subscribe now, then sign up for our morning newsletter, Wilmington Wire, and get the headlines delivered to your inbox every morning.