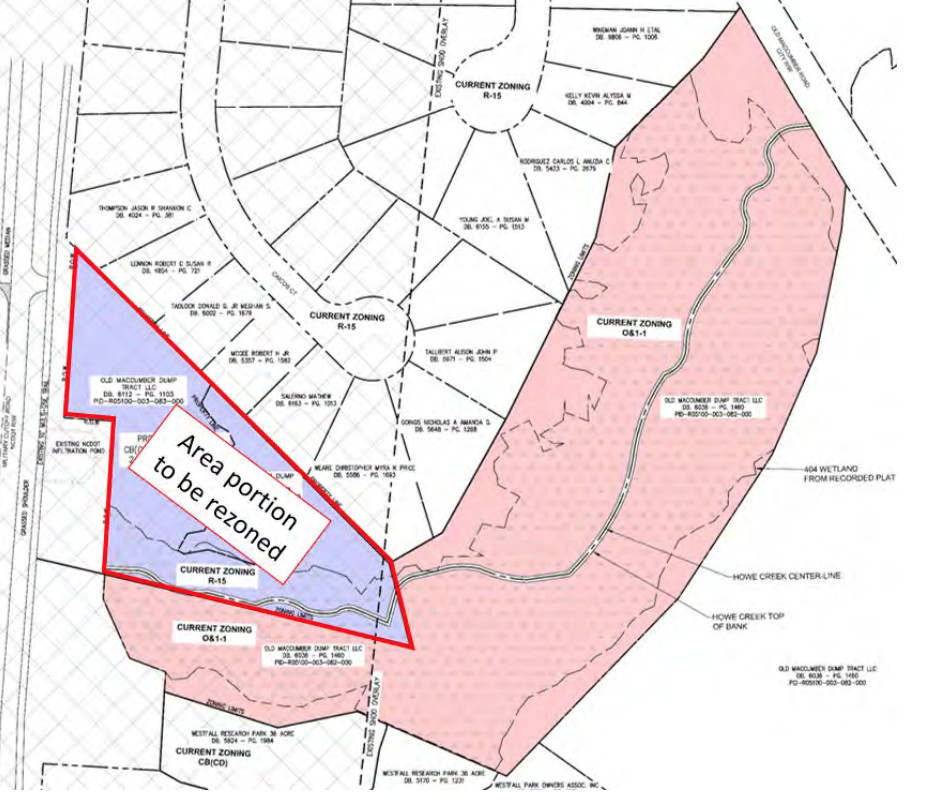 WILMINGTON — A 4-acre project off Military Cutoff Road with a thorny history was approved 5-1 by the Wilmington Planning Commission on Wednesday after a 12-minute litany of protests from a neighborhood spokesperson.

Caicos Court resident Matt Salerno was speaking on behalf of residents of Lucia Point, a Military Cutoff neighborhood north of the property.

“Certainly the financial reasons the developer and applicant have for rezoning this land cannot outweigh the potential impacts — the negative impacts — it will have on the immediate residents of our neighborhood,” Salerno said. in his comments.

Trask Land Company, represented by Raiford Trask III at the meeting, supports the 2.76-acre Westfall North development at 701 Military Cutoff Rd., across from downtown Mayfaire. Its original proposal called for 10,000 square feet of office space and 5,000 square feet of retail space and a restaurant. After its initial rezoning application to the city, Trask decided to drop the last two uses, amending its application for two two-story office buildings totaling 21,200 square feet.

Port City Daily contacted Trask Land to find out why they had changed development plans, but did not hear back from the press.

The land is currently zoned for medium density residential use, or R-15. Trask wants to rezone as a conditional district for office and institutional use, which allows the city to include certain parameters beyond the general O&I standards.

However, the presence of lead in the soil complicates the plans for the project.

The parcel to be rezoned, the “buildable parcel”, is part of a mother parcel, owned by Trask, which extends from Military Cutoff to Old Maccumber Station Road.

Part of the buildable parcel was formerly the Wilmington Gun Club, which operated a shooting range in the 1980s used by the New Hanover County Sheriff‘s Department.

“Back then, in an entirely different world, we rented it from the sheriff’s department on a handshake for, I think, about five dollars a year,” Trask said at the meeting.

The parent property, called the Old Maccumber Dump Tract, includes wetlands under a conservation easement. The land adjacent to the parent parcel, also owned by Trask, is referred to as “Ammo Dump Lake” in county property records.

Lead contamination affected all three sections, including Howe Creek which runs through the properties.

The building plot completed a North Carolina Department of Environmental Quality remediation plan in 2013, but it did not remove all contamination. Therefore, it was still subject to land use restrictions.

In 2019, an NCDEQ report cited 270 tons of hazardous lead impacted the floor of the old shooting range and 8 acres of wetlands (the latter is not on buildable land).

The NCDEQ approved a plan in February 2020 to carry out a full cleanup of the site. At the meeting, Trask said $1 million has been spent in the process so far.

“My 84-year-old dad said, ‘Son, I want this mess cleaned up,'” Trask said. “We have a very good plan approved by the state, and a very good project that allows us to do this and we can take the initiative.”

The plan includes the felling of trees to extract the contaminated soil. Once this phase is complete, the property will go through a one-year monitoring period before construction can begin.

Tree removal to construct a commercial building is not suitable for the residents of Lucia Point, which would be surrounded to the north and south by commercial development.

Salerno noted that most residents would prefer the land to be developed within its R-15 zoning rather than for commercial purposes.

“We believe that any commercial categorization on this property is significantly detrimental to existence and quality of life in Lucia,” Salerno told commissioners in a 12-minute speech.

Parking and traffic were among his concerns. Trask is required to offer 34 spaces but to include 57 plus four4 accessible spaces in its plan. Drivers would access the site through a street from the military cutoff. Although a traffic impact analysis was not required for the development, plans indicate that an average of 300 cars would make weekday trips to office buildings, while the number is only 75 for residential use.

Military Cutoff Road currently sees an average of 32,000 cars per day, according to application documents.

Another issue with the plans is the razing of trees, which currently provide a vegetative barrier between Lucia Point and the property. Trask explained that a privacy fence will be erected at the property line during construction and trees will be replanted upon completion.

“Unfortunately, a lot of the lead is near that property line,” Trask told the commissioners. “There is an area where we will have to totally cut down all the trees. It’s a pretty short domain. We understand this is not ideal for this owner.

The tree removal adds to stormwater concerns expressed by Salerno and Commissioner Jack Pollock. The development plan would create 51,425 square feet of impermeable area, or approximately 17% of the site. According to the development engineer, stormwater should be treated for contamination before being discharged into Howe Creek.

“In reality, all of this impermeable surface is right behind five or six residential homes and we have significant concerns about water runoff and impacts to our property,” Salerna said.

Planning staff explained that tree removal and stormwater permits would be determined based on the decisions of the technical review committee.

“So any of those items could be a red light and stop until properly addressed to go through the committee,” Pollock said.

Salerno claimed the development was not in line with Wilmington’s Comprehensive Building Plan, which guides sustainable and responsible land use in the city.

“Most important to our opposition to this is protecting the character of single-family neighborhoods,” Salerno told the commission.

Ultimately, the commission agreed that the development was a good use of the land and consistent with the large amount of commercial development already along Military Cutoff Road. Al Sharp was the only commissioner to dissent.

“I sympathize with neighbors who don’t want to have commercial development, but it’s on a main thoroughfare, Military Cutoff,” Commissioner Bruce Bowman said. “You can choose items from the full plan to support anything.”

The development will proceed to a legislative hearing following a review by the TRC.

Want to know more about PCD? Subscribe now then subscribe to our newsletter, Wilmington Wireand get titles delivered to your inbox every morning.