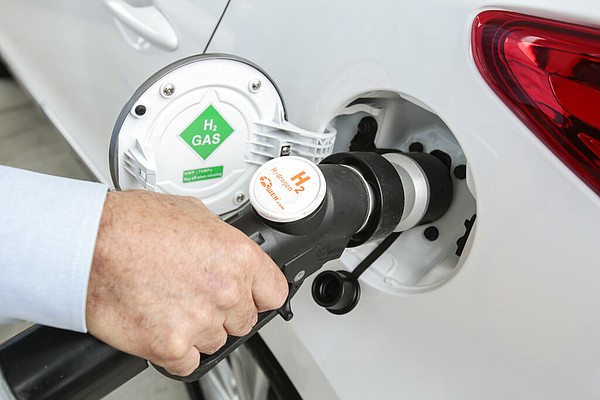 SPRINGDALE — Regional planners on Wednesday approved a resolution to name part of US 412 from Interstate 49 to the state line, which is planned to be a future interstate highway, as an alternative fuel corridor for electric vehicles , even though state agencies declined to make the appointment.

Planners then approved a resolution directing staff at the Northwest Arkansas Regional Planning Commission to do the necessary paperwork internally and submit the nomination to the U.S. Department of Transportation.

Such a corridor is comprised of a series of alternative fuel distribution sites conveniently located along a highway for the traveling public to meet the emerging need for such supplies. The U.S. Department of Transportation’s Federal Highway Administration designates a nationwide network of plug-in electric vehicle and hydrogen, propane, and natural gas charging infrastructure along National Highway System corridors. The objective is to support the deployment of low- or zero-emission vehicles and to reduce transport-related emissions.

The designation would make Arkansas’ 22-mile stretch of freeway eligible for a new federal infrastructure law grant to install electric vehicle chargers. The designation is already pending on the portion of US 412 in Oklahoma.

“Why this is important is that Arkansas should receive $54 million over five years for an electric vehicle charging infrastructure network in the state and there is also an opportunity for a discretionary grants of $2.5 billion,” said Tim Conklin, deputy director of the commission. . “Being on the map is essential to participate in this program.”

According to the resolution, US 412 is designated as a critical freight corridor that connects Interstates 35, 44, and 49, facilitating the movement of freight, improving connectivity to national airports and inland ports, and enhancing economic development opportunities.

“We’re trying to bridge that 22-mile gap between the casino and Cracker Barrel, to put it into perspective,” Conklin said. “Twenty-two miles in that gap, everything else is designated.”

Conklin compared it to finishing the gap in I-49 from Bentonville to Pineville, Mo.

US 412 is now designated as a future freeway on the National Highway System, from I-35 in Noble County, Okla., to I-49 in Springdale.

The resolution called for the Arkansas Department of Highways and Transportation and Department of Energy and Environment to make the appointment, but the Regional Planning Commission, as the metropolitan planning organization for Northeast western Arkansas, may also submit the nomination.

Brad McCaleb of the Highways Department said Wednesday that his agency and the Energy Department are working on a statewide plan that includes all current interstate highways and that they don’t want to designate small portions of other roads in various parts of the state at this time.

“Our position at this point is that we will not be submitting any additional corridors for nomination and the reason for this is that the guidelines specify a priority on freeways and we have already designated Interstate 30, Interstate 40 and Interstate 49 , so I’m thinking that would build those hallways,” McCaleb said.

The highway department will consider additional corridors to name in the future, he said.

Nelson Peacock, president and CEO of the Northwest Arkansas Council, listed in a letter to regional planning a number of reasons to support the designation, including the number of electric vehicles registered in the north. -Western Arkansas – 39% of the state’s electric vehicles are registered in Benton, Madison or Washington counties – and to increase the region’s competitiveness for federal subsidies.

“Automaker Canoo announced in November that it would move its research and development operations and global headquarters to northwest Arkansas, meaning that area will become Arkansas’ premier site for manufacturing. of electric vehicles,” Peacock’s letter reads. “In addition, Canoo will locate its largest manufacturing facility in the MidAmerica Industrial Park, located on US 412 in Oklahoma.”

Peacock said the move would give motorists confidence that they would be able to charge when they travel to Arkansas and reduce “range anxiety,” a vehicle-buying deterrent. electrical.

“As you know, Arkansas has several highways designated as alternative fuel corridors, including I-49 in northwest Arkansas. It is important that these designations also include the busiest U.S. highways in our state,” Peacock wrote. “The 22-mile section of US 412 between Siloam Springs and Springdale is located in one of the fastest growing areas in the state, and it should be added as an alternative fuels corridor.”