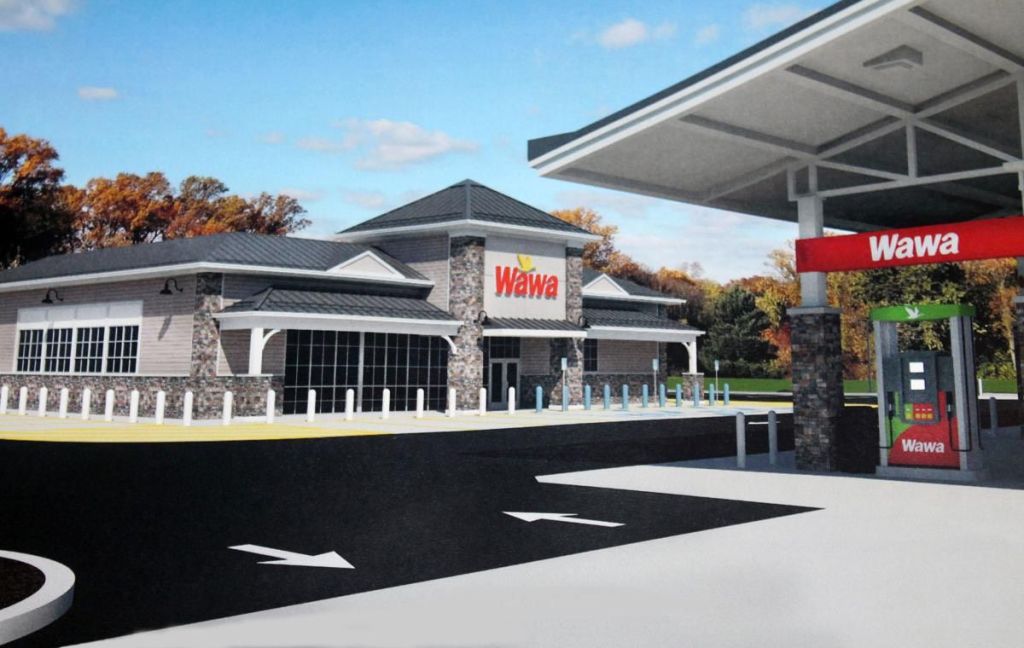 NEWTOWN TOWNSHIP >> The Newtown Township Planning Commission will recommend that the Board of Supervisors reject the preliminary and final land development plans submitted by Provco Pinegood LLC for a Wawa convenience store and gas station at the Newtown Bypass and at Lower Silver Lake Road.

After several hours of consideration, the April 5 commission could not muster enough votes for a recommendation to be approved, deadlocked by three votes in favor and three votes against. The tie vote results in a de facto recommendation of denial, according to attorney Jerry Schenkman.

After listening to Provco’s presentation, Driscoll, Christiansen and Deutsch said they still had a lot of reservations about the plans, especially traffic, and weren’t ready to recommend approval.

“I’m certainly not against economic development and I’m not against Wawa, but we have a chance to get it right,” Christiansen said. “For me, right now, there are too many questions. I cannot recommend this for approval in the future without their responses.

Deutsch added: “While I’m not against a Wawa, there are a lot of questions that keep coming up, especially with traffic studies. And that’s getting really important. I’d like to see the developers come up with updated counts. At this point, I don’t feel comfortable recommending this advancement without updated reports.”

Donaldson, Dallas and Howland argued that Provco had met all of its professionals’ requirements under Order E30 and should get approval for the plan.

“They met all the requirements that our professionals asked for,” Dallas said.

Donaldson agreed. “We’ve been working on it for five or six years and it’s in line with everything we wanted to see in terms of the new order.”

Howland added. “I spent a few years on the finance committee and a big topic was how to fill the hole that Lockheed Martin left in our township budget. There is a tremendous effort with the Buck County Planning Commission to figure out how to revitalize our industrial park and attract new employers. To do this, there must be services that support these people who come in… We hope that if there are more services, it will attract more employees and increase our EIT. If Wawa helps us do that, I’m all for it.

Access to the store would be from Lower Silver Lake Road via a right-hand entry only and a full intersection at the store entrance across from Crossing Community Church.

During the meeting, commissioners reviewed plans for the store and service station, including input from the township’s civil and traffic engineers, Newtown Fire and Emergency Services and the commission Bucks County Planning Board.

Many of the outstanding issues were “will be compliant” by the developer, but there were several issues that planners focused on including traffic, the size of the canopy above the fuel dispensers, storage buffer of the landscape and the appearance of the store and gas station of the bypass.

During public comments, a handful of township residents addressed the commission, including two opposed to the project and one in favor.

“There are family businesses here that fix cars and sell gasoline… Those businesses are going to be hurt if you continually allow businesses like Wawa to come here,” he said.

“I try not to use the ring road because I’m tired of the traffic here. Being there is going to cause more traffic and more headaches,” he said.

Another Newtown Grant resident, John D’April, spoke out in favor of the Wawa. “I know a lot of people don’t like it because of the traffic, but if you install a dependency there, it’s going to drive traffic. I’m for the Wawa no matter where they build it. I think Newtown needs a Wawa.

Township resident Ned Hollerbach said he was disheartened that the zoning law was changed “to shoehorn in” a Wawa. “It’s a GOLD zoned neighborhood and gas stations aren’t allowed there. So why change the law to a monopoly to give them a good deal and smother the little guy? We have a lot of small businesses here that respect the rules. The change in the law allows Wawa to override all the small businesses here.”

He also expressed concern about the potential impacts the Wawa development could have on the Silver Creek waterway where he will be canoeing. “It’s already a degraded waterway. The same goes for the Neshaminy stream. I don’t think 12 to 16 gas pumps will do our local fleet any good.

The planning meeting also attracted a group of Northampton township residents who are fighting plans for a new Wawa in their Dutch neighborhood. They attended the meeting in solidarity with their neighbors in Newtown Township.

After listening to public comments, Planning Chair Peggy Driscoll noted that after being challenged in court by Provco for not allowing the combined use of a convenience store and gas station, the township, in conjunction with neighbors Wrightstown and Upper Makefield, designed the use of the E30, which allows convenience stores and gas stations as use within the township office search area provided they meet the requirements set by the ordinance.

The last time Provco appeared before the township was in September, when it won a special exception from the township’s zoning hearing board to build the convenience store in the search area of ​​the township’s offices under the E30 use.

While approving the use, the zoning board denied waiver requests at all levels for signage and additional gas pump stations.

Land use plans submitted by Provco and reviewed by township planners on April 5 will now go to the oversight board for review and action.

If the council votes to approve, Provco can move forward with its plans to build a Wawa and gas station in the township. If the board votes to deny the plans, Provco can appeal the decision to the Bucks County Court of Common Pleas.

Provco hopes to obtain planning permission from the township during the spring and begin work later this year.