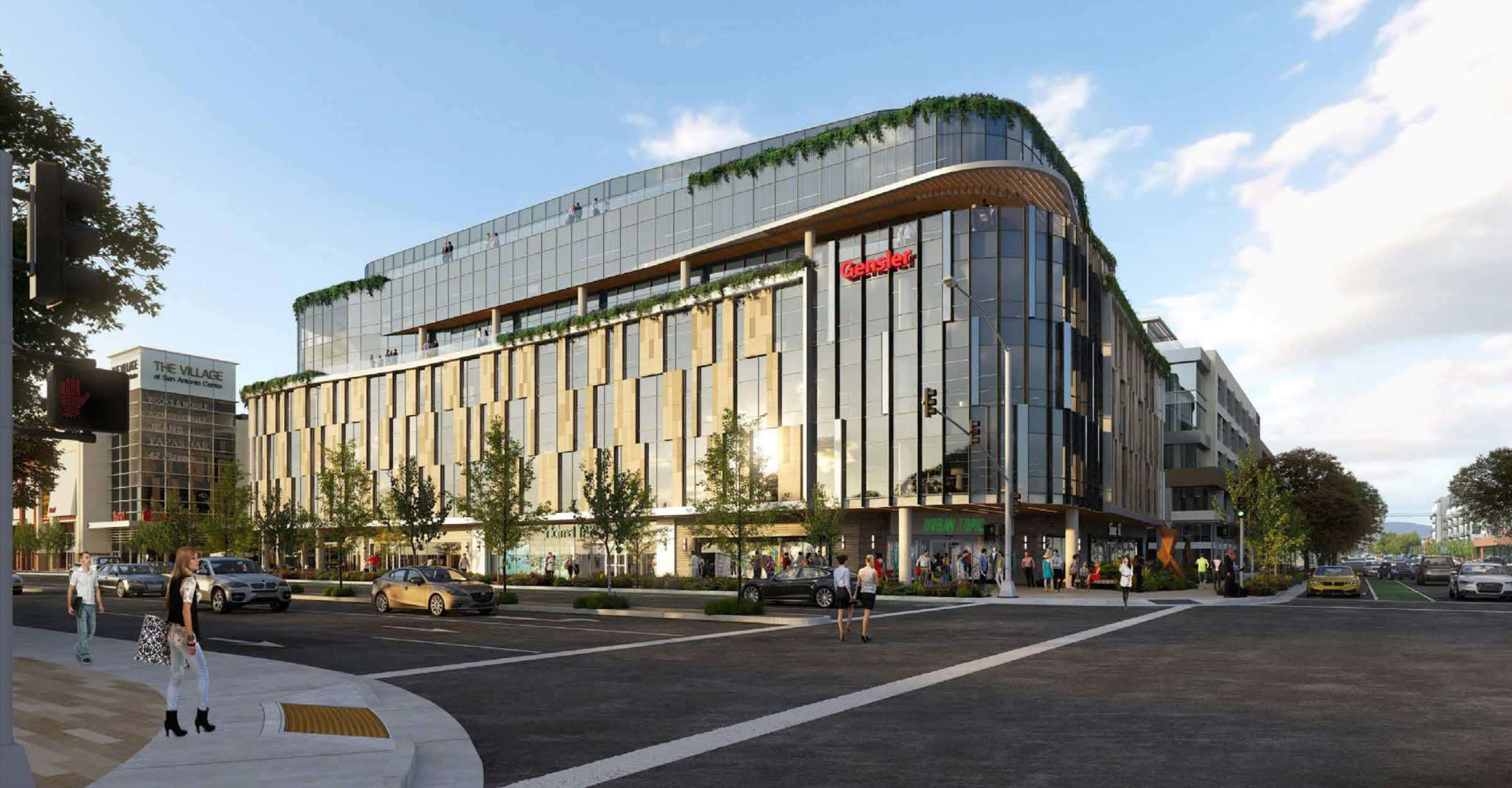 The third and final phase of redevelopment of the shopping center San Antonio Mountain View to an end after the environmental planning city commission voted unanimously Wednesday, April 20 for the seven-storey office project proposed by the promoter Merlone Geier.

The project, if approved by council next week, would replace two commercial buildings on the corner of San Antonio Road and California Street – including the former Milk Pail Market – with a 95ft-tall office building . Although gigantic in comparison, the building would rival the size of neighboring offices and an apartment complex across the street.

Merlone Geier has long sought to develop the angle property and complete vision of the mall called Village at San Antonio Center, which has rapidly increased in density to include office buildings and the highest housing in the past decade. In this case, the developer used an unusual strategy to cram so many square meters – over 180,000 square feet – into just under an acre of land.

By buying the school district development rights of Los Altos to fund a school nearby, Merlone Geier received permission to build 150,000 additional square feet beyond the 32,352 square feet generally allowed on the property. In other words, the development rights to increase the density of the project more than five times what is normally allowed.

Merlone Geier asked the city to abandon its height limit of 75 feet without providing public benefits, normally a requirement, with the city staff noting that the purchase of the school district promoter of development rights amounted to nearly $ 20 million, can be interpreted as public benefit.

The city council wasn’t exactly in love with the project. The original eight-storey version presented in 2019 failed to win enough votes to go through the planning process. He didn’t get much better in Flight 2020, when board members complained about the box-shaped nature construction and described as a missed opportunity to build more housing.

Still, others were willing to bear the inconvenience if the project helped fund the construction of an expensive school on the east side of the mall.

The latest iteration seems radically different from previous proposals, with a curved facade and a glass front, which the developer will create a “single architectural expression” for the site that reduces the size and the perceived visual scale of the building. Given its prime location, previous reviews from the city called for an “iconic” design.

The planning commission was mixed on whether Merlone Geier hit the mark. Commission member Chris Clark said he wanted a design that didn’t look like “another box next to a box”, and that the developer did a good job of addressing his concerns. Commission Chairman Bill Cranston said the redesign improved the building’s setbacks and provided ground-floor space for retail, but questioned whether the building looked less imposing .

“I personally don’t think the visual size and scale of the building is different from the previous one,” he said. “It looks different, the curves certainly make it more interesting, but I don’t know if the sense of scale has ever been achieved.”

Merlone Geier calls for a sharp reduction in parking, only 283 of the 637 spaces normally required, arguing that the wider network of parking infrastructure built in the shopping center will be able to accommodate future employees. The total number of parking spaces across the phases would be 2,866, according to a report from city staff.

Crossings residents of nearby neighborhood have expressed concerns about the fact that the project, as well as strong support residential development in the area of San Antonio, will worsen traffic problems have increased in recent years. Michelle Ohye told council members that “the explosion” of development means that the road to San Antonio is now locked in the off-peak hours, and an entire section 1.6 mile artery is now crowded.

“That’s what we go through on a daily basis,” she said.

Tim Mather, also a Crossings resident, said the city and its traffic advisers had unrealistic expectations that public transit would reduce vehicle travel to a tolerable level.

But Clark said those concerns have been looked into. The city’s San Antonio Precise Plan analyzed traffic impacts for future development in the area, and the plan considered a level of office development that is consistent with the project. He also noted that there were promising signs that employees working in nearby offices – leased by Facebook – were taking public transit instead of driving to work before the coronavirus pandemic.

Mountain View City Council is tentatively scheduled to hold a public hearing on the project on May 24.