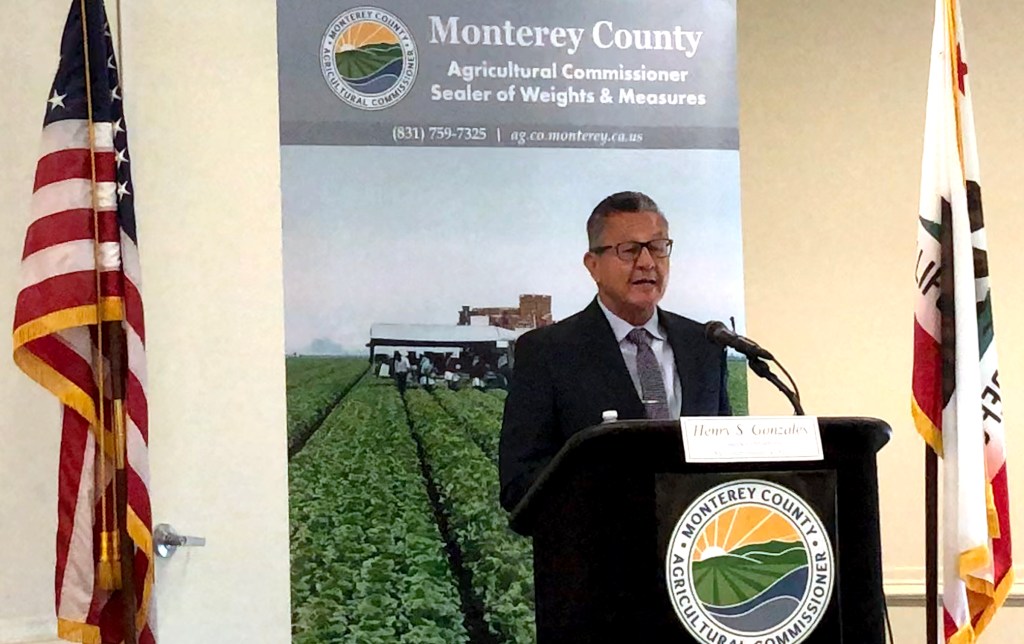 In 2008, Gonzales left to become Ventura County Commissioner of Agriculture, then returned to Monterey County 10 years later to become commissioner.

Gonzales has deep roots in agriculture being born into a family of migrant farm workers, starting work as a farm laborer at the age of 14, thinning lettuce with the short-handled hoe called “el cortito” or ” the short” in Spanish.

“I am grateful for the opportunity to transition from farmhand to agriculture commissioner,” Gonzales said in a press release. “My roots have provided me with an invaluable perspective that has played a vital role in all the work I have done as Commissioner.

Gonzales singled out successful projects in his list of accomplishments, including the first production of a Cannabis Crop Report summarizing commercial cannabis production in Monterey County, the Key Crops and Livestock Report, which is an important product of the Commissioner’s Office, being translated into Spanish for the first time to better reach agricultural workers, successfully implementing an industrial hemp pilot program, signaling for the first time the economic value industrial hemp in the annual crop report and successfully implementing the school and pesticide regulations.

When the COVID-19 pandemic hit in 2020, followed by wildfires later that year, the needs of agricultural workers who were essential workers in the food production chain were paramount. Gonzales says successes during this time include creating a council for the protection of agricultural workers during COVID-19 in partnership with local elected officials and agricultural industry organizers, creating essential agricultural employee cards in Spanish to educate agricultural workers on services available at the start of the pandemic, the distribution of more than one million single-use surgical masks, more than 50,000 16.9 oz. bottles of hand sanitizer and more than 360,000 N95 respirators to help protect farm workers from the virus and wildfire smoke, and the creation of the bilingual farm worker helpline, 831 -809-2394, to receive concerns, questions and complaints directly from agricultural workers.

“Agricultural Commissioner Henry Gonzales was the right person at the right time for Monterey County,” Supervisor Chris Lopez said in the statement. “Through a pandemic, layered with wildfires and new pest challenges, he rose to the challenge and led by launching a collaboration. I will miss his leadership and will always appreciate his unwavering dedication.

Gonzales says he plans to travel and spend more time with his family, as well as seek new and interesting challenges.