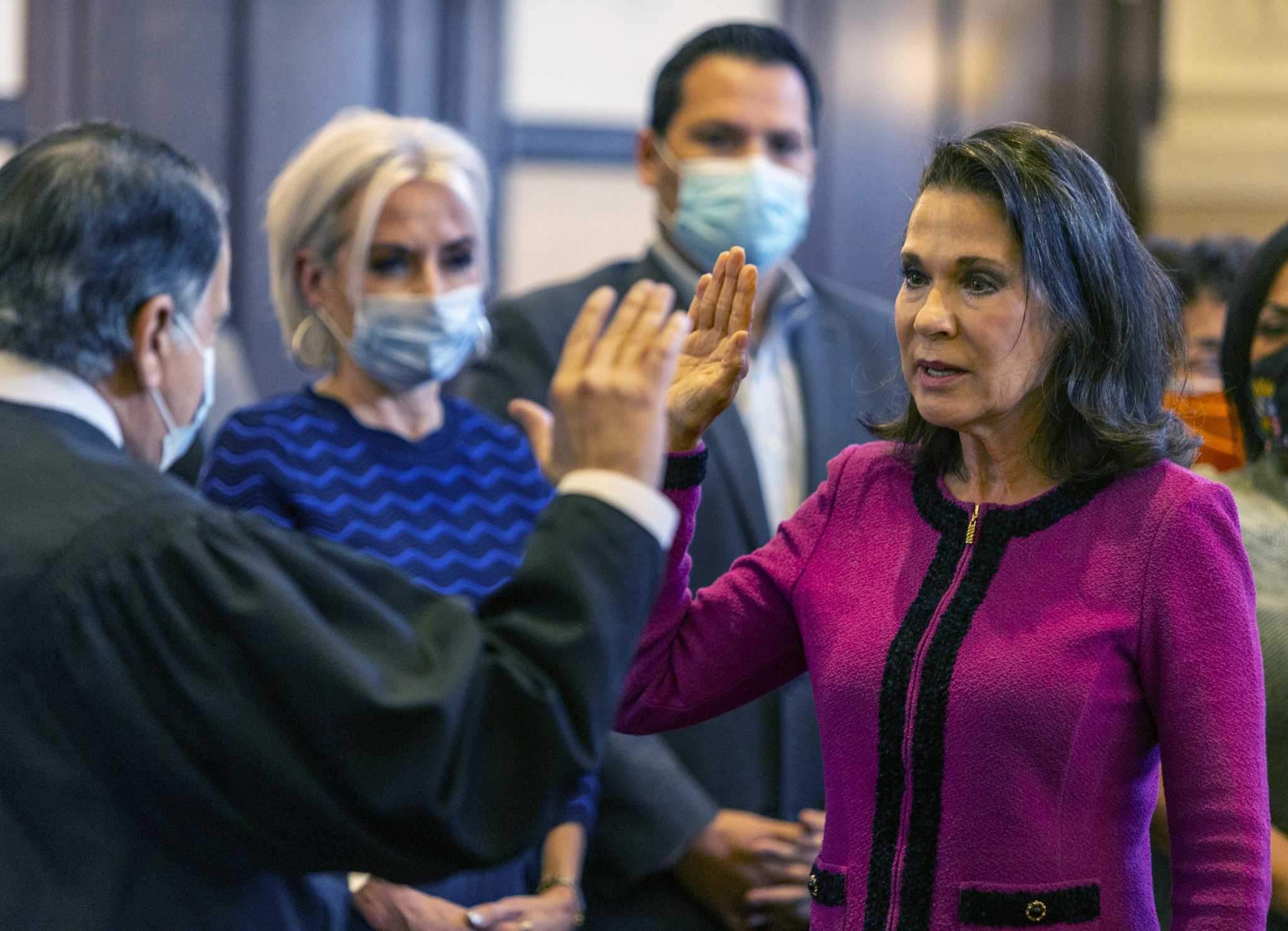 Former 4th Court of Appeals Judge Marialyn Barnard was sworn in on Tuesday to serve as the acting commissioner of Bexar County District 3, representing the North Side.

Barnard, a Republican, will serve at least until 2022 in place of Commissioner Trish DeBerry, who resigned last month to run for county judge. Barnard did not rule out the possibility of running in the fall as the GOP candidate for the remainder of DeBerry’s term in 2023 and 2024.

County Judge Nelson Wolff, who is not running for re-election, said he selected Barnard from 27 people who applied because of her experience in the private sector and her work as a teacher and judge.

“I wanted someone with qualities of independence and leadership,” Wolff told reporters at a press conference.

Barnard, who was sworn in before US District Chief Justice Orlando L. Garcia, said she was “deeply moved” by the selection. She had worked as a lawyer and legal assistant under Garcia in the early 1990s.

â€œYour faith and confidence in me is overwhelming,â€ she told Wolff. “I promise to hit the ground running.”

“I look forward to learning more and taking action to meet the immediate needs and priorities of Bexar County,” Barnard said.

DeBerry, who was consulted on the nomination, said she believed Barnard would do a good job representing the county’s rapidly growing northern quadrant. DeBerry staff immediately began a transition on Tuesday to prepare Barnard to sit on the dais at the next regular meeting of commissioners on January 11.

Barnard has held numerous legal positions at the state and federal levels and has held corporate law-related positions, including corporate advisor and head of business intelligence at CPS Energy from 2001 to 2005. She has served on the 4th Court as an individual appointed by Governor Rick Perry. from 2009 to 2018 and was Vice President of Product Development for TXdocs Innovative Legal Software from 2019 to 2021.

After working as a social worker in the Texas Department of Human Services for two years, she was a high school teacher in the Northeastern and Lackland Independent School Districts from 1985 to 1989. She is a member of the Board of Trustees of the Christus Santa Rosa Children’s Hospital. Foundation and was Chairman of the Board of Directors of the Rotary Club of San Antonio from 2015 to 2016.

Barnard’s appointment is the latest development in a chain reaction that began when DeBerry ran for county judge in the March 1 Republican primary, just before the December 13 deadline and under a year after his first four-year term as Commissioner.

Wolff initially said DeBerry could stay put for 60 days. This opened the door to criticism directed at Wolff that DeBerry had the political power to hold the post, sit on the dais until February, while running for county judge. On December 21, Wolff expedited the nomination process. He announced a deadline for nominations of December 31 and said he hoped to appoint an interim commissioner in early January.

Barnard did not rule out the possibility on Tuesday of running in the fall to serve as commissioner until 2024. Former city councilor and mayoral candidate Greg Brockhouse is also among several potential candidates interested in running for the nomination. Republican to run for the post of commissioner to the general of 8 November. election. Meanwhile, former city councilor Reed Williams was the first to come forward by announcing he would run for the seat as an independent candidate.

The party’s nomination process for the November election for Constituency 3 commissioner is unusual as it has typically only been used to replace a sitting judge or a candidate from the deceased party. The Texas Secretary of State’s office initially said primaries could be held so voters can elect Democratic and Republican candidates.

But the state office overturned that decision two days later. Under the Texas Election Code, because the vacant position was created less than five days before the primary nomination deadline, an executive committee made up of constituency presidents from each party will nominate a candidate for the general election. .

“If I was solicited or selected by the (Republican) presidents of the precinct, I would be honored,” Barnard told reporters.


Wolff said the county’s Democratic and Republican parties are expected to make nominations for the District 3 seat in June after the election of new constituency presidents. He said DeBerry told him the day before his filing that she would seek to succeed him on January 1, 2023. Wolff has been the county’s most elected official since 2001.

â€œI just told him that I thought maybe the way was there, but that it would be a challenge. You never know what’s going on politically, â€Wolff said.

On ExpressNews.com: DeBerry said she made a “ridiculously difficult decision” to run for county judge

Wolff said he was not sure whether he would support an election candidate for his successor.

â€œAt the moment, I don’t intend to. I want to see how the primaries go, â€he said. â€œI think we’ll have a lot of choices.

Wolff said he had no plans to slow down a bit in his senior year before retiring from public service at 82. Commissioners will begin work in February to develop a plan to spend remaining funds from a $ 388 million federal stimulus package and discuss capital improvements. They could also consider an initiative to present to voters in November on the use of hotel-motel tax revenues for “nonprofits that engage in sporting activities,” Wolff said.