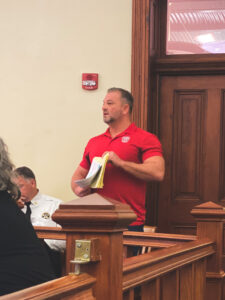 The Hopkins County Commissioners Court discussed the payment of election workers, among other agenda items, at its regular meeting on December 13. After opening the meeting at 9:03 a.m., Hopkins County Judge Robert Newsom opened for comments from citizens [see related story], and the public forum was closed at 9:22 a.m.

The court unanimously approved a request by Farmers Electric Co-Op to have utilities cross County Road 2333.

The court then discussed the use of county timesheets for election workers.

County Treasurer Danny Davis has indicated he would like to use county timesheets for election workers.

Davis said he was “not asking that the state requirement be removed,” only that the county implement county timesheets in addition to election timesheets in Texas.

Barker wanted to know if Davis’ plan was “different from what we’re already doing” and Smith replied yes: in that case the poll workers would fill out two timesheets. One for the state and one for the county.

â€œBasically they point and point,â€ Calhoun said. Calhoun further said she believes the county keeps good track of where and how much time workers spend in the election, thanks to the full report from the auditor’s office.

Smith told the court that if such a step was taken to use county documents, the documents would have to be “reworked” to include specific legal language required by the state. â€œIf we are audited by the state, they will want this,â€ she said.

Barker asked Davis to review the proposed documents with the court, and the men did. Davis also shared the information with Pct. 3 Commissioner Wade Bartley. County Judge Robert Newsom, a doctor of law, paid particular attention to the language prescribed by the state, in particular the oaths required by election officials.

â€œIt’s not that we’re so old that we don’t want to change,â€ Calhoun said. â€œThis is the legal department of the Secretary of State, we called and asked them. They said no.

Davis replied that he wanted an addendum to the legal legend.

“I just want it [timesheets] on an official document where it is traceable, â€he said. â€œIt was handwritten. It was illegible. I couldn’t make heads or tails out of them.

Calhoun volunteered to type handwritten notes for Davis. She said she was concerned about giving more tasks to those who set up election materials, who often spend 12 to 16 hours on the job for more than two weeks at a stretch. She said some of those hours are labor intensive.

Calhoun also said she feared those who set up election materials would step down after failing to receive the promised salary. Davis replied that he was appalled that the poll workers who set up voting booths were promised $ 20 an hour, when he believed the court had only allowed $ 12 of the time.

â€œBy law, I can’t pay someone for something that isn’t budgeted for,â€ Davis said. “We cannot find any documentation on this.”

Calhoun said she found documents dating back to 2009 regarding the $ 20 an hour wage for those setting up election materials. Davis said he found no such documentation.

Barker proposed to table the motion so that “the heads of departments resolve this”. The court unanimously upheld the petition, and the petition was filed until a later date.

The court then discussed the conversion of electoral materials regarding Senate Bill 598.

â€œWe made the switch to electricity (voting machines) in Hopkins and people really love it,â€ Newsom said. “However, to be compliant we can still keep our electricity, but now the electric system will be eliminating paper again.”

Smith said federal funding will cover costs 100% as long as the conversion takes place by November 2022. Total costs provided would be $ 314,520, and Hopkins will be responsible for purchasing the software and training the workers.

The point was adopted unanimously.

The court unanimously passed a retroactive wage of $ 20 an hour dating back to November 2 of this year for those who installed election materials.

â€œIt’s a lot of manual labor, it’s a lot,â€ Smith said. â€œThis is an agreement between the previous clerk and the previous auditor,â€ they explained. Since 2009.”

Barker asked if those who installed the election materials hadn’t been paid for the previous election, and Smith said that was correct.

Davis approved the measure in court, urging them to “do it legally.”

The court unanimously passed the final dish for the addition of Twin Farms Lake, consisting of 24 lots near the community of Weaver and located in Pct. 3 south of Farm Road 269, one mile south of Interstate 30, near County Roads 3644, 3351 and 3344.

The court recognized Citizen Jacob Brown for his excellence in completing the Texas Commission on Fire Protection Instructor I and Instructor II courses, held on November 29, as well as for obtaining certification for a position. Instructor I or Instructor II on December 3.

The court unanimously allowed PCT. I to renew his 3-year lease on a backhoe for a total of $ 8,250, which falls under Pct. I budget.

The court had no budget amendments or post transfers.

The court unanimously authorized the payment of the bills.

The tribunal had no grants or donations to accept.

The tribunal had no personnel issues.

The tribunal had property to dispose of.

The court had neither resolutions nor proclamations.

Without further question, the court was adjourned at 9:53 a.m.

By Taylor Nye. Abbi Beggs contributed to this report.

An earlier version of this report did not specify who would receive a salary of $ 20 and misidentified Calhoun’s job title. It has been updated to reflect this.

Regular Meeting of the Fannin County Commissioners’ Court on December 21