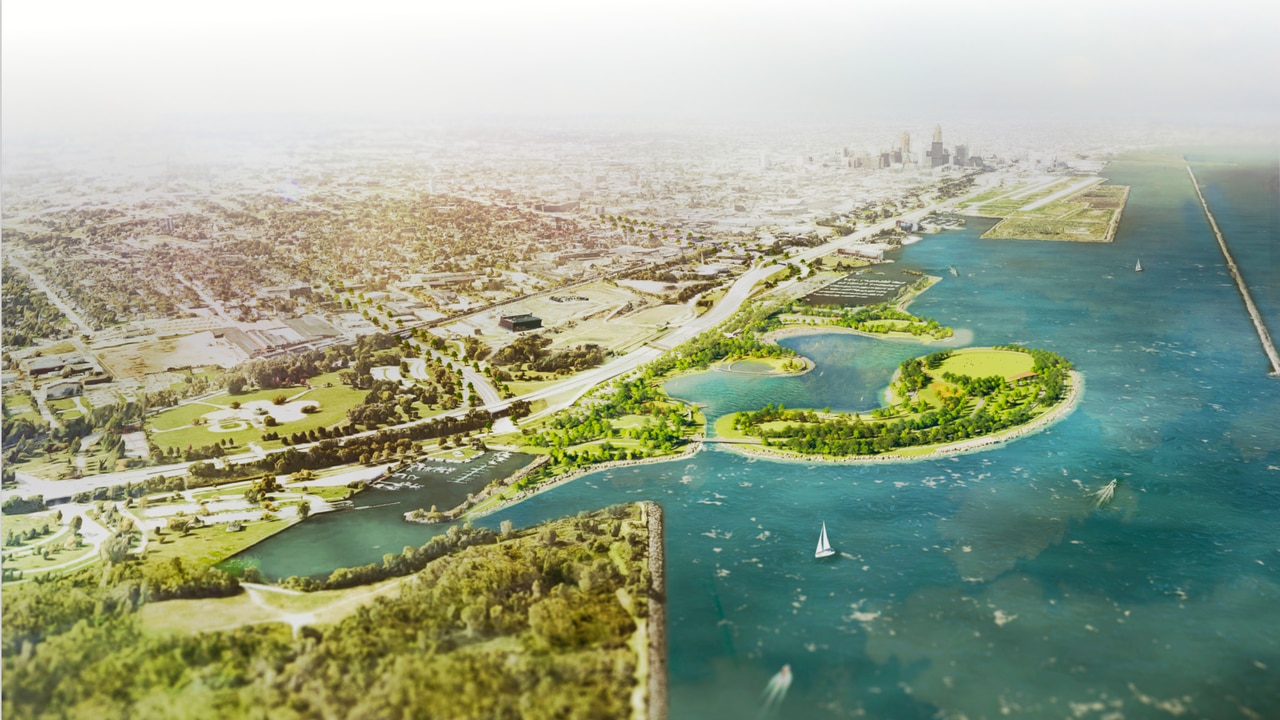 CLEVELAND, Ohio – The City of Cleveland Planning Commission on Friday unanimously approved a plan developed by Cleveland Metroparks and other public agencies to use clean and recycled sediment dredged from the Cuyahoga River to create 76 acres of new park between East 55th Street Marina and Gordon Park on the east side of town.

The project, which could cost around $ 300 million, would include 150 acres of land and water. Wetlands, rolling hills, lawns, plenty of trails, and an area for launching paddle boats are all part of the vision, designed by a team led by Philadelphia-based landscape and town planning firm WRT.

“There is so much to like about this project,” said Lillian Kuri, a member of the committee just before Friday’s vote. “I hope this is a shining star, or a star in the north, for many other great civic projects that can be done.”

The project aims to solve the problems that have plagued the East Side of Cleveland for decades. One is that the construction of the Interstate 90 Shoreway in the 1940s and 1950s walled miles of shoreline, creating a huge disparity between lakefront access on the city’s majority Black East Side versus the More racially diverse West Side, which is well served by Edgewater Park.

The other problem is that the I-90 hugs the shoreline between Gordon Park and the East 55th Street Marina so closely that it is vulnerable in heavy storms. The highway had to be closed when it was hit by 20-foot waves during Super Storm Sandy in 2012.

CHEERS, which could take 15 to 25 years to complete, plans to use dredged material from the river to thicken the shore where the highway curves too close to the water.

The plan also describes how the East Side neighborhoods could be better connected to the waterfront through improved bicycle and walking paths on East 55th Street, East 72nd Street, and Martin Luther King Jr. Drive.

The five entities each contributed $ 25,000 to the study. They were recently joined by the nonprofit Black Environmental Leaders Association, which advocates for environmental and economic justice.

Metroparks and its partners unveiled a very polished draft of the CHEERS plan in April.

At Friday’s meeting, planners including Freddy Collier, Jr., Cleveland’s planning director, described CHEERS as an outgrowth of the City of Cleveland’s 2004 Waterfront District Plan, which planned to create a series of Landfill islets east and west of downtown to protect the shoreline while using dredged sediments from the Cuyahoga River to create a new park.

The latest version of the CHEERS plan, shared at Friday’s meeting, calls for the creation of a new 36-acre “island”, just north of the former FirstEnergy coal-fired power plant at East 72nd Street, to form a barrier around protected coves. The island would be connected to the mainland by a bridge and trails.

On the mainland side, the plan envisions adding 42 acres to shape the new coves with curving shores and gentle natural edges between the 22 acres of East 55th Street Marina and Gordon Park.

The new areas of the park would connect the marina with Gordon Park and the 88-acre Cleveland Lakefront Nature Preserve, a Cleveland Harbor park established on a landfill north of Martin Luther King Jr. Drive and east of Gordon Park.

Expanded and connected park spaces would, in effect, become the East Side’s response to Edgewater Park.

New cost estimates shared at Friday’s meeting show that the CHEERS project could cost $ 302 million. Planners compared the cost to a similar investment to other recent urban projects, including the $ 306 million Opportunity Corridor.

The next steps for CHEERS include the development of building plans, based on the concept approved by the planning commission.

Project planners said on Friday they hoped to know in November whether they would receive just over $ 900,000 from the nonprofit National Fish and Wildlife Foundation.

The money would be used to create detailed, ‘shovel-ready’ designs for the first two elements of the project – an additional landfill area east of the East 55th Street Marina and a curved barrier for the north side of the project. island, which protect the southern shore areas.

The grant, if awarded, would trigger an 18-month planning process that could begin in 2022 and lead to detailed construction cost estimates.

The goal, according to McDermott and Coffman, would be to qualify for the construction money that could be made available through the infrastructure spending advocated by the Biden administration, if approved by Congress.

In another key milestone, the city of Cleveland announced at Friday’s meeting that it had received $ 100,000 from NOACA, the Northeast Ohio Areawide Coordinating Agency, for a study on how to improve pedestrian connections and Lakeside biking via East 72nd Street and Rockefeller Park and Martin Luther King Jr. Drive.

â€œWe have a really good dose of confidence that in the next few months we will be successful with partners to start raising funds to implement this project in phases,â€ McDermott said after the meeting. â€œWe all need to be patient. Today was a big step.

Additional coverage at the lake: