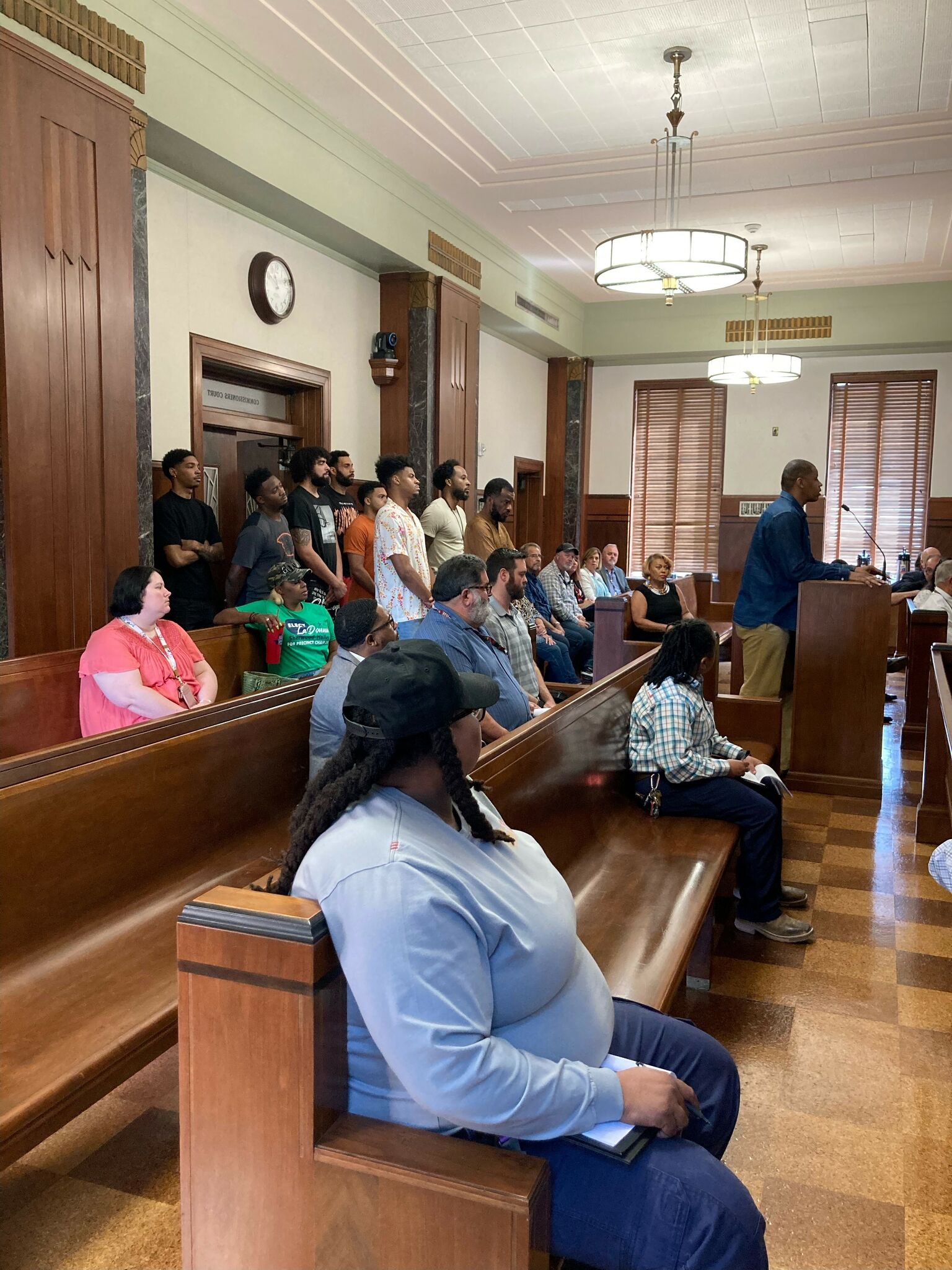 The Beaumont Panthers are looking for answers after being pulled from their home gym at Ford Park Entertainment Complex.

Last weekend, Beaumont’s only professional team played two home games at Memorial High School in Port Arthur after being told they could no longer play at Ford Park.

The team, led by owner Jay McDonald, was at the Jefferson County Commissioners Court meeting on Tuesday to question why Ford Park was able to turn them away after the team was promised a place to play.

“When we came here, Renaissance Group was what we thought was in charge of Ford Park based on who was making the decisions at Ford Park,” McDonald told the Court of Commissioners. “And if (Kevin Johnson) has made decisions and he’s no longer involved, it’s not right to just wipe your hands and say y’all get out. It is simply wrong.

In a statement sent to the Enterprise, Ford Park general manager Claudio Oliveria said the Panthers’ lease was direct with Ford Park and was signed last summer.

“Due to a concern over outstanding balances, we advised the team last week that they were in breach of the agreement and that access to Ford Park would be restricted until the issue was addressed and their contractual liability is fulfilled,” the statement said.

Renaissance Development Group had been in negotiations with Jefferson County to buy Ford Park for two years before the deal closed in March 2022. The county gave a deadline of March to complete the sale, but Renaissance was not able to provide the funds.

At the time, Renaissance president Kevin Johnson told the Enterprise that he was still committed to the project, but didn’t elaborate on what that meant.

Meanwhile, the Panthers had been playing their home games at Ford Park since the start of the season in early March.

McDonald said “someone” told Spectra to waive the teams’ fees to allow them to play at Ford Park.

“And we were doing great as long as Renaissance Group was involved,” he said.

At the Commissioner’s Court meeting, Beaumont ISD School Board Secretary Stacey Lewis Jr. also spoke in support of the Panthers. He petitioned the court for new local leaders in Ford Park to work for the benefit of the community.

“I have come here today in allegiance to the Beaumont Panthers and to ask you to begin the search for a new direction for Ford Park, not renew the contract with Spectra or terminate their contract and hire locals to operate Ford Park,” Lewis said. “Since Ford Park’s inception, taxpayers have footed the $7 million annual bill for the facility.

Spectra Venue Management’s contract to operate the facility ends in September. Regardless of this issue, the commissioners have been working to determine whether they will extend the contract for another five years, as Spectra has requested or sought a new partner.

“Ford Park has had its own share of pro teams to include, but not be limited to, the Southeast Texas Mavericks, Golden Triangle Gators, Texas Wildcatters and Beaumont Drillers,” Lewis added. “Are we looking to add the Beaumont Panthers to the list of professional victims?

But after this testimony, Precinct 4 Commissioner Everette “Bo” Alfred informed McDonald and the team that their grievance was not with the Commissioner’s Court.

“To my knowledge, no one on this field had ever authorized Spectra to give the Beaumont Panthers permission to play for free,” Alfred said. “No one on this ground that I know of has ever given Kevin Johnson authority to contract with anyone at Spectra or Ford Park that I know of.

The Panthers will finish out the rest of the season at Memorial High School, but the team’s future location remains unclear.

“At the end of the day, the team isn’t going anywhere,” McDonald said. “Where we play is another thing, but we’re going to be here. It might not be Beaumont, which I hate because me and Kendrick Perkins were both from that area. But as long as it stays in Southeast Texas is fine.

The Panthers’ next game is Wednesday, May 18 at Memorial High School against the Dallas Skyline.

This is a developing story.

Thomas Scott is the sportswriter for Beaumont Enterprise. Contact him at [email protected] or on Twitter by clicking here.

Do not miss anything: Sign up for our Daily Headlines newsletter.

Celebration honors activist and county commissioner who died of COVID